This report was released on 15 December 2017 and looks into the geographic impacts of the transition of the Australian economy following the resources investment boom.

There has not been a government response to this study yet.

These results, data and code should be used in a manner consistent with explanations in the report. Chapters 2 and 4 and Appendix E explain how the index should be interpreted. Details of the methodology and data sources used to construct the index can be found in Appendix E of the report.

Consistent with the Commission's approach of making available our modelling and key datasets, the full set of supporting information is comprised of the following four components:

An excel spreadsheet showing summary results for the index of relative adaptive capacity for Functional Economic Regions (FERs) in 2016 (as presented in the main report). The summary results include contextual information (including state identifier, population, and remoteness code and category), as well as information about the factors contributing to the index score and the confidence interval for the index score.

A zip file containing data and R code to construct FERs. It includes: a document describing how to run the R code to compute the FERs; the various R codes; datasets, stored as excel or comma separated value formats; and shapefiles use to generate maps of the regions.

A zip file containing data and R code to compute the index of relative adaptive capacity. It includes: a document describing how to run the R code to compute the index; the various R codes (programming scripts written in R to do the various analyses); datasets, stored as excel or comma separated value formats (these datasets are imported by the R code, with data manipulation and statistical analyses done in the R code); and shapefiles use to generate maps of the regions.

Australia has benefited substantially from the mining investment boom (ending around 2012), with gains still evident around the nation.

The substantial investment in mining capacity provides a strong base for future gains to Australia from higher volumes of mining exports. While both exceptionally large and long-lived, this recent boom illustrates that no investment boom is permanent.

The report into transitioning regional economies by the Productivity Commission reveals employment in the mining industry remains more than double pre-boom levels. However, some people and businesses have suffered due to the end of the investment boom and many communities are still adjusting.

'A highly flexible workforce and a substantial use of fly-in, fly-out workers has meant benefits of the boom weren't confined to one area, but instead spread to other regions. This also meant that the downsides of the end of the boom were not concentrated in mining regions,' Commissioner Paul Lindwall said.

The report also examines regional and urban areas and the different pressures they have faced. The Commission's new index of relative adaptive capacity offers a common standard for future research and analysis of regions.

The report warns that ill-planned government spending in regional areas often does little in terms of creating jobs and wealth and makes a number of recommendations to address this.

'Governments are spending billions of taxpayers' money on regional programs and projects and we have some serious reservations about their effectiveness in helping people and businesses adjust to new circumstances or their contribution to sustainable growth in regions. Many of these programs have not been subject to rigorous selection or evaluation,' Commissioner Lindwall said.

'Making States and Territories more directly responsible for regional development is crucial to removing unnecessary overlap, duplication and inconsistencies between all tiers of government, while improving regional outcomes. Commonwealth intervention should be rare and is justified only by extreme events,' Paul Lindwall said.

The report states that better analysis of proposed regional economic development programs needs to be undertaken by the States and Territories to ensure scarce taxpayer resources are efficiently used. This needs to be supported by strong and effective local leadership, which is critical for good results.

Discretionary spending by governments should be directed to the highest human priorities identified in regional strategic plans. And evaluation would be assisted if all governments used consistent regional boundaries.

Other recommendations include removing or reducing unnecessary regulation that impedes regions from taking advantage of opportunities and being more targeted in providing any assistance to regions in the rare cases where it might be applicable.

The report is available at: www.pc.gov.au/inquiries/completed/transitioning-regions/report

Further information on the index and FERs can be found in chapter 4, appendix D and appendix E of the final report. 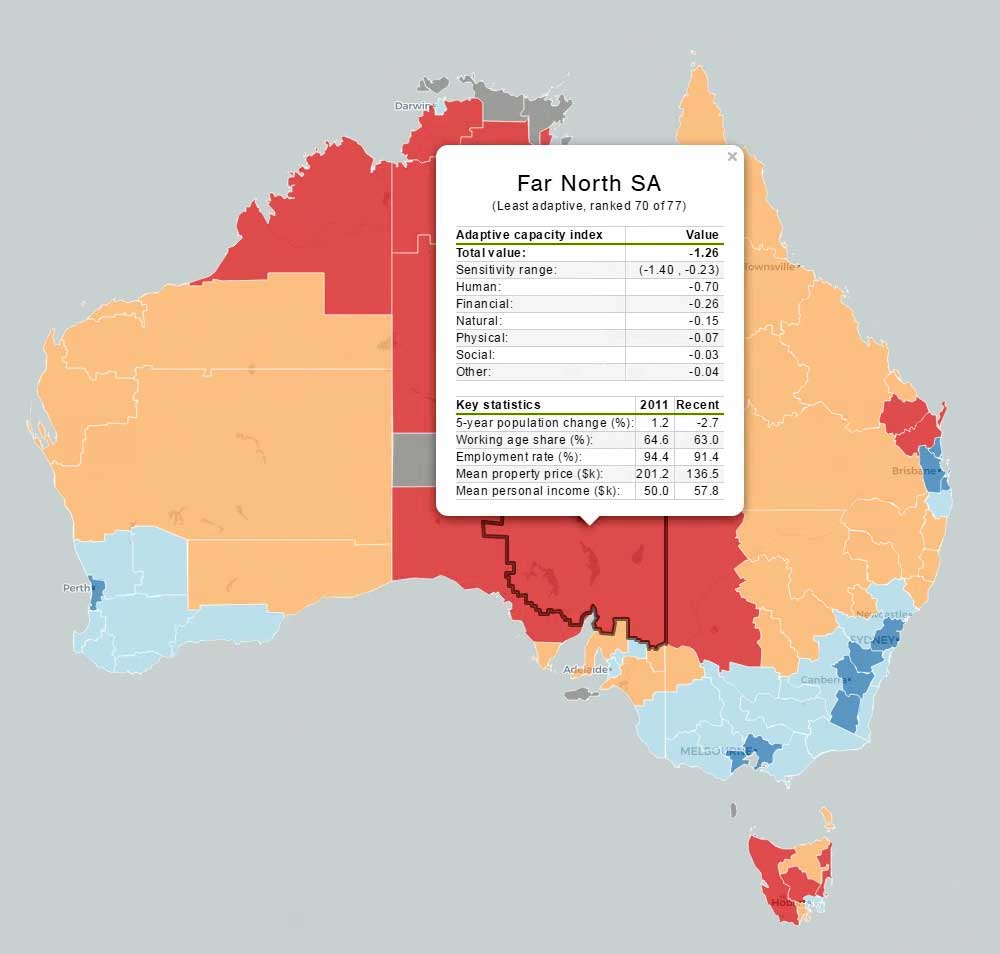 Interact with the map