In 2013-14, Australian industry received over $17 billion in gross assistance from the Australian Government through budgetary outlays, tax concessions and tariffs according to the latest annual Trade and Assistance Review (The Review) by the Productivity Commission.

The Review finds that while tariff assistance today is much lower than it was - from as high as 125% in 1985 to a maximum of 5% today - on average it 'taxes' every Australian about $150 each year. Businesses incurred an estimated $7.3 billion in additional input costs in 2013-14, from the same source.

The net effect of assistance varies significantly by sector. Manufacturing remains the biggest beneficiary, receiving around $7 billion in net assistance. Other sectors do far less well from the taxpayer. Services once again bear a greater imposed cost - with the tariff penalty on their inputs perversely outweighing the benefit from government assistance measures.

The Review highlights that services are more important than traditional trade statistics suggest. While trade statistics suggest that manufactures are about 36% of Australian exports, on a value added basis much of this is composed of services. Consequently, services are more like 42% of Australian trade; and manufactures fall to around 14%. Imposing a net burden on services through industry assistance measures in part designed to promote exports appears even less explicable.

The Trade and Assistance Review 2013-14 also outlines policy insights from the evolution and recent developments in the measurement of global value chains. The new data tracks global value chains as goods and services journey between countries, regions and industries before they end up in the hands of the consumer. This recently available data shows that more of our exports ultimately end up in Europe and the United States than suggested by traditional Australian trade data. 'Global trade statistics now unravel the DNA of value-added trade between countries and regions. Current policy settings not based on them, and many trade and industry policies are not, are at best ill-informed' said Commissioner Karen Chester.

The Review also comments on the weakness of Government assessment of both industry assistance and preferential trade agreements (otherwise known as 'free trade agreements'). Established benchmarks for assessment are not being applied. Even if the policies were advisable, the analysis to support that is not being developed as might be expected.

A 'gap analysis' of assessment work for the Japan Australia Economic Partnership Agreement compared with the Commission's previously published benchmarks for rigorous assessment has been undertaken and is included in the Review. 'Our 'gap analysis' of the Japan Australia Agreement shows today's assessment processes fall well short of what is needed before committing us to these agreements,' Commissioner Karen Chester said.

The following excel files contain tables of data used to make the charts within the Trade and Assistance Review 2013-14. There is also an extra file with data of Australian Government budgetary assistance by program. 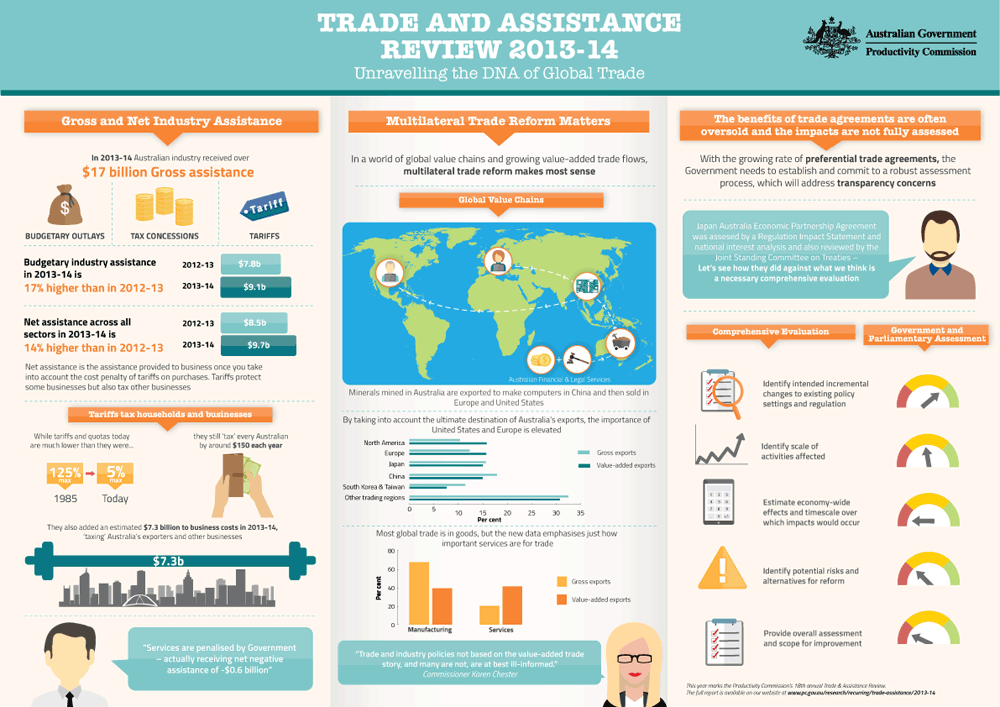 Trade and Assistance Review 2013-14 (text version of the infographic)

Unravelling the DNA of Global Trade

Net assistance is the assistance provided to business once you take into account the cost penalty of tariffs on purchases. Tariffs protect some businesses but also tax other businesses.

They also added an estimated $7.3 billion to business costs in 2013-14, 'taxing' Australia's exporters and other businesses.

Minerals mined in Australia are exported to make computers in China and then sold in Europe and United States.

'Trade and industry policies not based on the value-added trade story, and many are not, are at best ill-informed.' Commissioner Karen Chester.

With the growing rate of preferential trade agreements, the Government needs to establish and commit to a robust assessment process, which will address transparency concerns.

Japan Australia Economic Partnership Agreement was assesed by a Regulation Impact Statement and national interest analysis and also reviewed by the Joint Standing Committee on Treaties - Let's see how they did against what we think is a necessary omprehensive evaluation.

Read more detail in the report.