This paper was released on 7 July 2015. This report is a detailed analysis of two aspects of superannuation policy affecting the post-retirement phase:

As part of its research for this paper, the Commission has developed a model - referred to as the Productivity Commission Retirement Model (PCRM) - to assess the effects of increasing the preservation age. Modelling supplementary papers are available from the tab below.

The preservation age - the age at which people can access their superannuation savings - is considered by some to be an important policy lever in managing the transition to an older Australia. The Commission has found that, consistent with expectations, raising the preservation age encourages some people to work longer and accumulate more superannuation.

Modelling undertaken by the Commission in order to better understand the response of individuals to a gradual increase in the preservation age to 65 suggests that:

Once they have access to their superannuation savings, individuals are afforded much flexibility in drawing them down. Some consider that this discretion is desirable given the diverse circumstances of retirees. Others are concerned that it encourages individuals to exhaust their superannuation too quickly by taking lump sums and leads to more reliance on the Age Pension.

The evidence suggests that most retirees are prudent in their drawdown behaviour. Less than 30 per cent of superannuation benefits are taken as lump sums. When retirees do take lump sums, they are most frequently used to pay down debt, invest in income stream products, and purchase durable goods that are used throughout retirement.

Lump sum use is not uniform, and is most prevalent among those with low superannuation balances (less than $10 000). These households tend to take between half and all of their superannuation assets as a lump sum. The evidence suggests that this behaviour has little impact on Age Pension reliance.

In undertaking its analysis, the Commission has identified a range of policy areas that warrant further and collective attention. These include:

The retirement income system has seen ongoing change to its components, albeit with less focus on the drawdown phase. But its overarching objectives remain poorly defined. Ideally, future changes to the system would be guided by a common set of objectives, informed by the principles of sustainability and efficacy, and considered as part of a holistic review involving considered and extensive community consultation.

Today the Productivity Commission released its research paper Superannuation Policy for Post-Retirement. The report is a policy research sequel to the Commission's 2013 flagship research project An Ageing Australia: Preparing for the Future. Australia's ageing population has important implications for the retirement income system. This research report considers two important aspects of retirement behaviour — when and how people access their superannuation.

The report examines what might happen if the age that individuals can access their superannuation — the preservation age — were raised. Modelling undertaken by the Commission in order to better understand the impacts of a gradual increase in the preservation age to 65 years suggests that:

The report also finds that most retirees are prudent in the way they draw down their superannuation. While the use of lump sums attracts much attention, the report finds that their use is not problematic. Less than 30 per cent of superannuation benefits are taken as lump sums, with most superannuation benefits taken as income streams. Where lump sums are taken, they are most frequently used to pay down debt, invest in income stream products, and purchase durable goods that are used throughout retirement.

As a research project, the report makes no recommendations but its analysis and conclusions may be of relevance for future policy development. The Commission has also initiated a follow on policy research project examining the housing decisions of older Australians.

As part of its research on Superannuation Policy for Post Retirement the Commission has developed a model - referred to as the Productivity Commission Retirement Model (PCRM) - to assess the effects of increasing the preservation age. The PCRM can be described as a 'behavioural microsimulation' model.

Behavioural microsimulation models seek to simulate individual or household level decisions, and are commonly used within an economic framework to assess the impact of policy changes (such as changes in tax and benefits) on governments' fiscal positions and on labour supply. They are particularly useful where there is a wide variety of decision makers, and where complex policy changes are likely to impact these different decision makers in different ways. 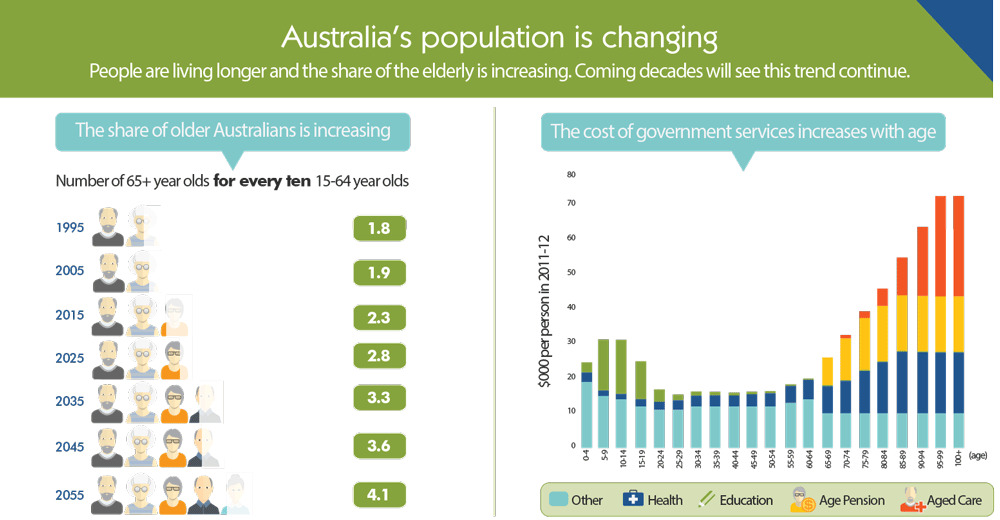 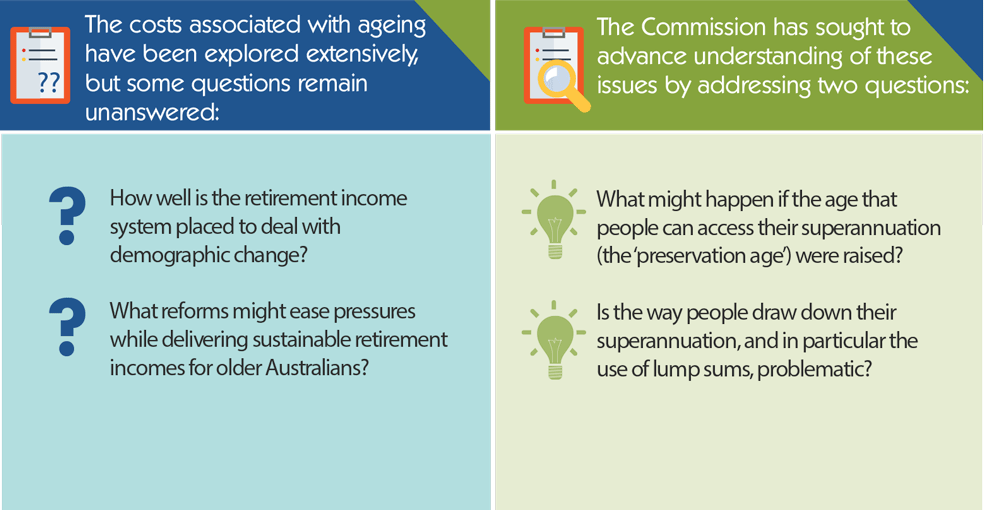 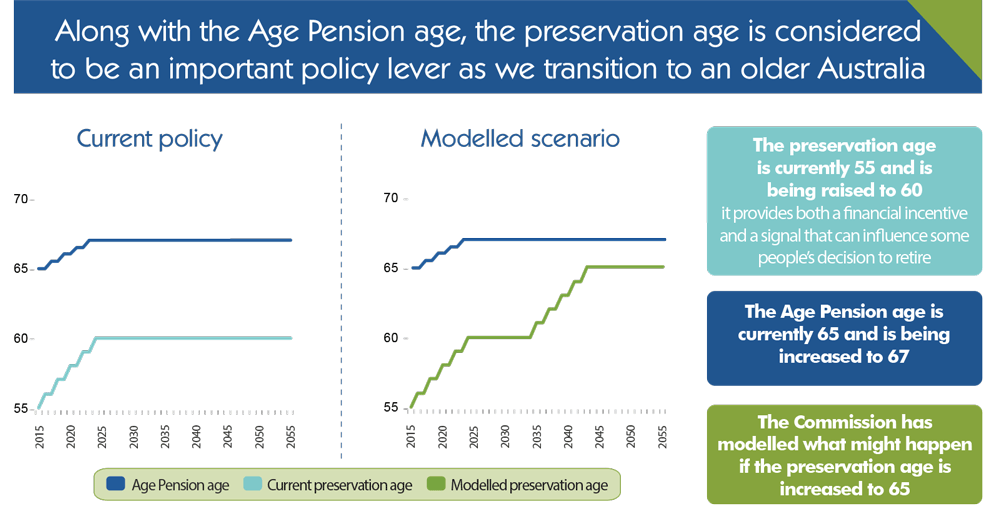 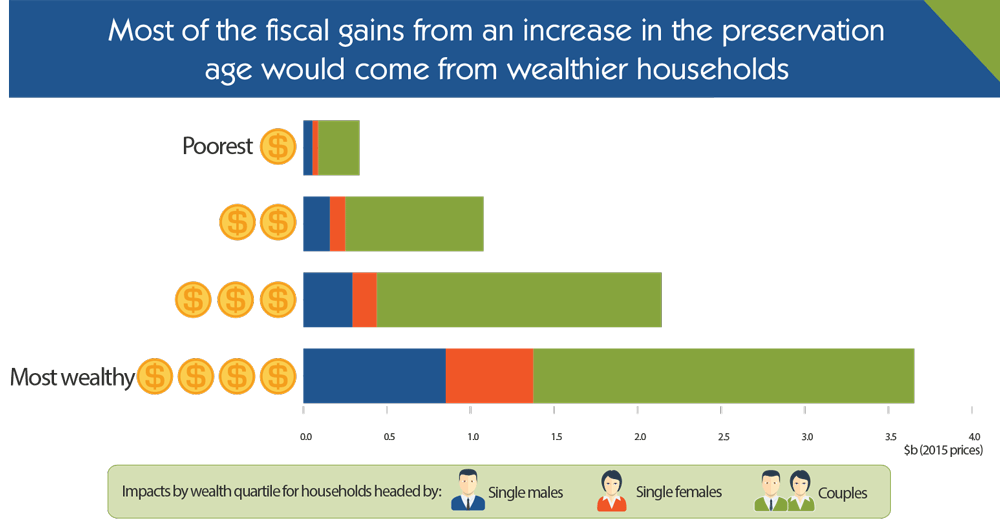 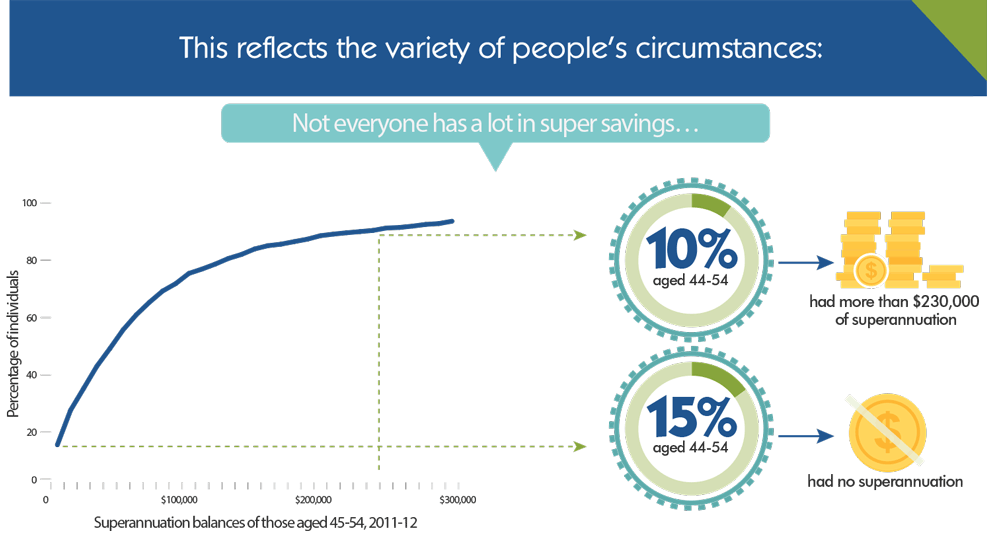 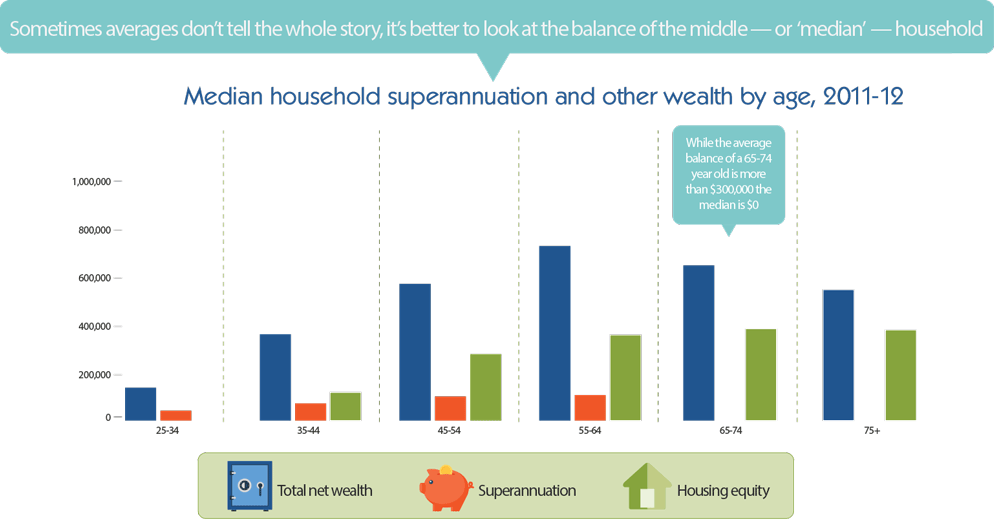 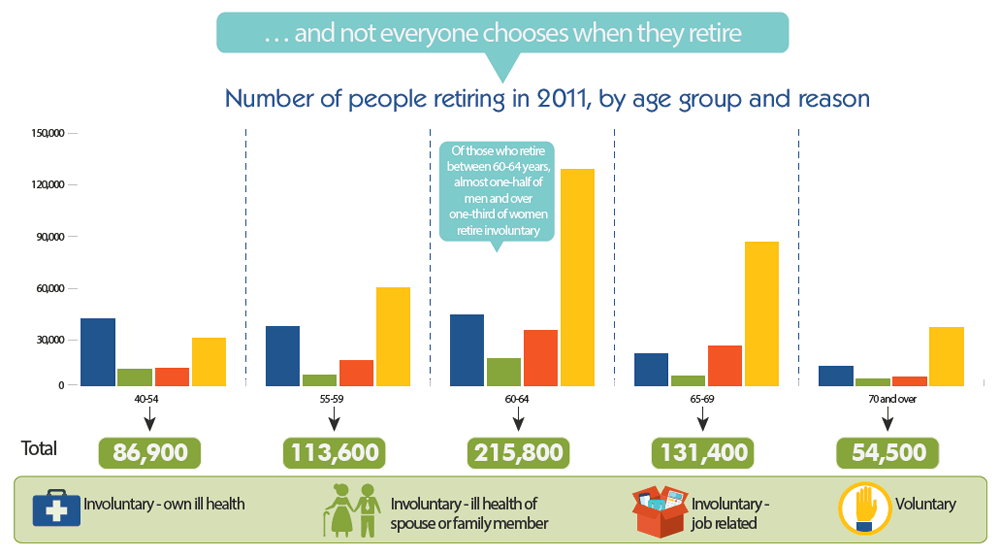 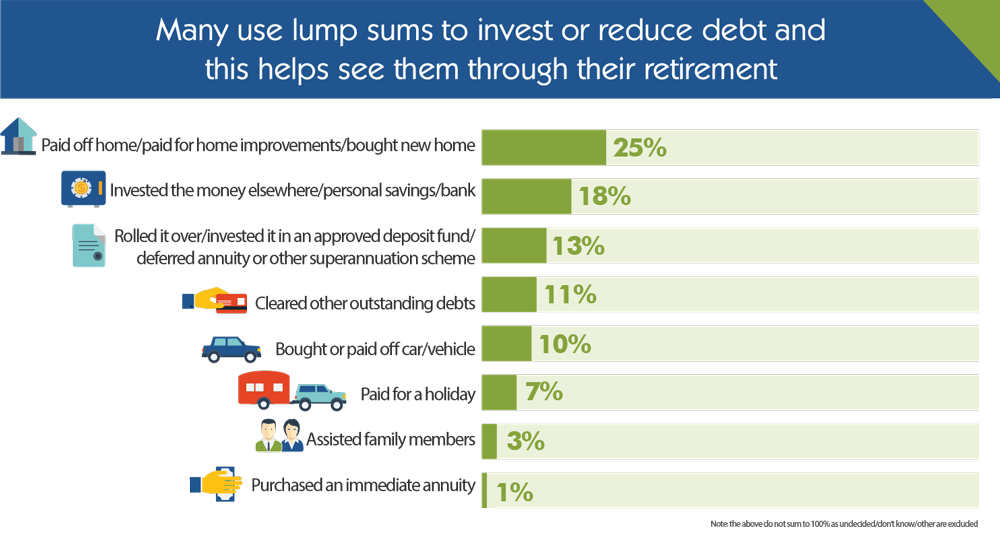 A research report by the Productivity Commission.

People are living longer and the share of the elderly is increasing. Coming decades will see this trend continue.

The cost of government services increases with age

The costs associated with ageing have been explored extensively, but some questions remain unanswered:

The Commission has sought to advance understanding of these issues by addressing two questions:

Along with the Age Pension age, the preservation age is considered to be an important policy lever as we transition to an older Australia.

The preservation age is cureently 55 and is being raised to 60, it provides both a financial incentive and a signal that can influence some people's decision to retire.

The Age Pension age is currently 65 and is being increased to 67.

The Commission has modelled what might happen if the preservation age is increased to 65.

What if access to superannuation were delayed until 65 years?

Commission modelling suggests that on average in 2055:

As a result, there are two fiscal effects: higher tax receipts and lower Age Pension outlays.

Most of the fiscal gains from an increase in the preservation age would come from wealthier households.

This reflects the variety of people's circumstances.

Sometimes averages don't tell the whole story, it's better to look at the balance of the middle - or 'median' - household. While the average balance of a 65-74 year old is more than $300,000 the median is $0.

Not everyone chooses when they retire. Of those who retire between 60-64 years, almost one-half of men and over one-third of women retire involuntary.

Is the way people draw down their superannuation problematic?

Some argue that people exhaust their superannuation too quickly by taking lump sums at retirement - there have been calls to restrict lump sums.

Note: the above do not sum to 100% as undecided/don't know/other are excluded.

Most superannuation is not taken in lump sums

Where to from here?

The retirement income system has been subject to ongoing piecemeal change. But its objectives remain poorly defined.

The Commission has found:

Ideally, before any further changes are made, the system needs to be considered as a whole with a common set of objectives in mind.

Read more detail in the paper.