Print
Inquiries
Research
About the Commission
News, Media and Speeches

Many factors can affect productivity growth. These include technological improvements, economies of scale and scope, workforce skills, management practices, changes in other inputs (such as capital), competitive pressures and the stage of the business cycle.

Why does it matter?

Productivity has been the driver of long term improvements in living standards. For example, the average Australian worker produces about as much in one hour today as it took a full day’s work to produce at Federation in 1901. This improvement in productivity has allowed incomes to rise even while working hours have fallen and Australian households have been able to enjoy more leisure.

Australians have grown steadily richer due to productivity growth

GDP per capita and labour productivity growth since Federation 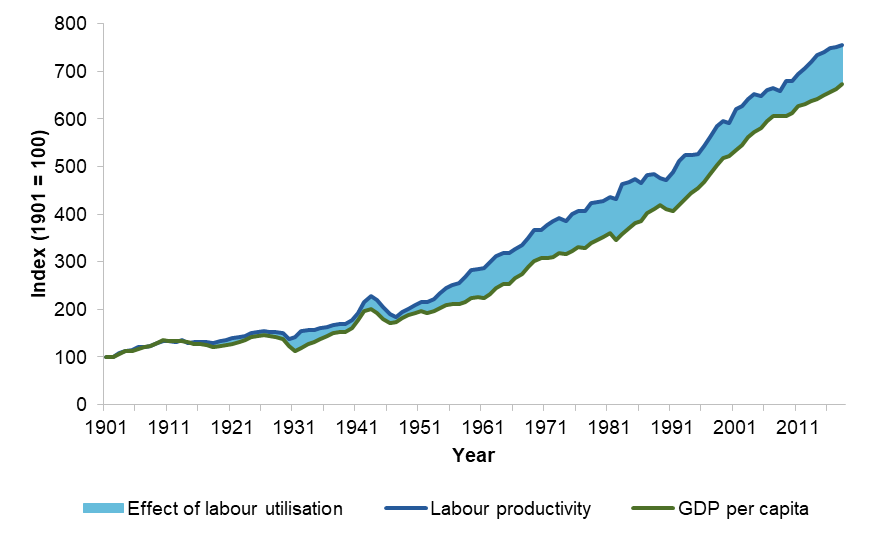 Productivity growth has been one of the primary drivers of increasing living standards for Australians. Put simply, the more goods and services a society can produce with a given set of inputs, the greater the material standard of living of that society. In terms of how this affects ordinary citizens on a day‑to‑day basis, the most noticeable effects will be:

The 'labour cost' of goods has fallen dramatically

Quoting just the increase in GDP per capita fails to capture the enormous change in lifestyle of everyday Australians, including the most disadvantaged members of society, since Federation. For example, the price of individual goods, in terms of hours a person needs to work in order to buy them, has fallen dramatically (see table below). Even rental housing costs, which have risen in real dollar terms, have fallen in labour cost terms — the average person needed to work about 22 hours to rent a three bedroom house in 1901, while in 2019 the same person would need only to have worked for about 12 hours. The bicycle provides a more dramatic example as in 1901 it would have required several months of work to afford, but now requires less than a day of work (for a basic model). These falling costs also likely understate the increased quality of most goods available now compared to what was available at Federation — even the lowest quality new bicycles produced now are much safer and easier to use than those produced then.

More significant in the lives of many people are the goods which are cheaply available now that had not been invented at Federation. Antibiotics, for example, have played a material role in lowering the mortality from infectious disease from about 30 per 10000 people in 1907 to 1 per 10000 people in 2017, and cost very little today.

The price of household goods then and now

What are the main measures?

Usually, the growth in labour productivity exceeds the growth in multifactor productivity. The additional contribution comes from ‘capital deepening’. That is, the accumulation of more and better capital equipment over time helps to make people more productive.

How do we measure outputs and inputs?

The output of simple businesses can sometimes be measured in physical units, such as the number of shoes or tons of steel. However, when thinking about entire industries or the economy as a whole, the range of different outputs need to be added together. The Australian Bureau of Statistics (ABS) calculates productivity using a measure of output called ‘gross value added’ (GVA), which is the value of the output produced by a firm minus the intermediate inputs used (materials, services and energy used in production).

In what parts of the economy is productivity measured?

The most accurate estimates of productivity are for those industries where prices are set in markets — known as the ‘market sector’. Market prices provide a measure of the quality of different products and make it easier to measure output in terms of real industry gross value added. The ABS provides estimates for two ‘market sectors’ — the 12 and 16 industry market sectors — the latter distinguished by the fact that less historical data are available.

Labour productivity can also be measured for the whole economy (in terms of real GDP per hour worked). Labour productivity measured in this way contributes to growth in living standards (commonly measured as GDP per capita), but is a poorer indicator of technological change and efficiency improvement because of the difficulty measuring output in health, education and public administration.

How can productivity be compared across countries?

While productivity growth rates can be compared readily across countries, productivity level comparisons require estimates of relative prices across countries. For example, if the cost of a hamburger in Japan is higher than the cost of a hamburger in Australia then the value of output in Japan will appear higher. These price differences may reflect differences in fast food worker wages and store rents, rather than differences in quality of service.

To ensure labour productivity levels are comparable between countries, output is converted to US dollars per hour worked based on exchange rates at purchasing power parity.

After making these adjustments, Australia’s labour productivity is high by international standards but is middling among other wealthy nations.

Australia's productivity performance is 'middle of the pack' among the OECD 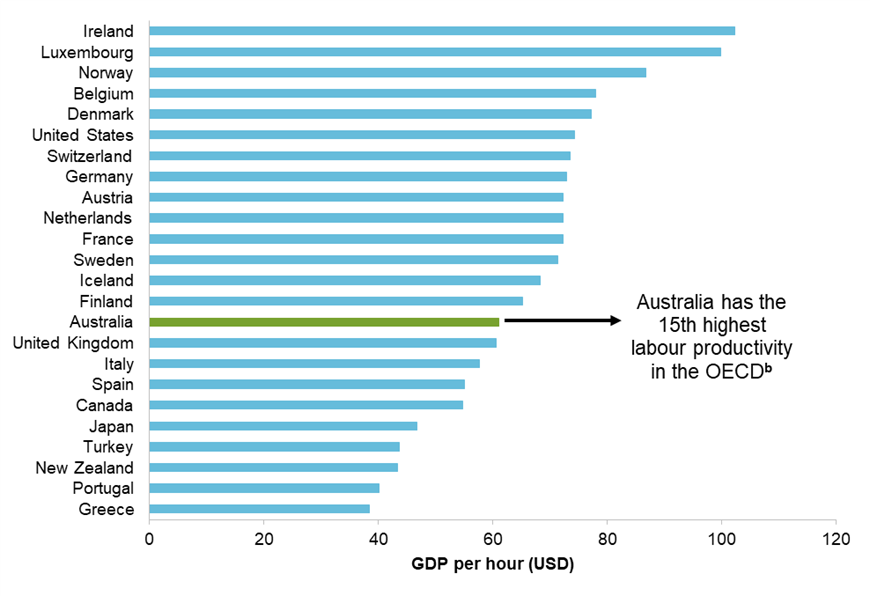 a Foreign currencies converted to US dollars using current PPPs. b Only the 24 longest standing OECD countries were considered. The figure for Turkey is for 2017 as the 2018 figure is not available.