Expenditure on Children in the Northern Territory

This report was released on 8 April 2020 and is about how the Commonwealth and Northern Territory Governments can work more collaboratively so their expenditure decisions improve outcomes for children and families.

A new approach to NT children and family services needed

A report released today by the Productivity Commission calls for a fundamental change in approach to the way the Commonwealth and NT Governments fund children and family services.

“The current COVID-19 crisis has shown how well governments can work together when they have to,” Productivity Commission Chair Michael Brennan said.

The Commonwealth and NT Governments collectively spend over $500 million per year on services to prevent harm to children.

“Despite their significant funding efforts, governments are operating in isolation. We saw too many examples where one agency didn’t know what others were doing.”

“The system is so fragmented that Governments can’t know where all relevant services are being delivered and whether they’re having an impact on the lives of children and families. There are overlaps, gaps and duplication in services,” Chair Michael Brennan said.

The report recommended that local communities and regional government staff work together to decide what services communities need and want. There are cultural strengths in every community and these should be built on.

“Community priorities should form the basis for negotiation and agreement between governments on what each will fund,” Chair Michael Brennan said. “There should be fewer decisions made in Canberra and Darwin.”

The funding process also needs significant reform. The report contains an example of a provider who has 11 different grants from the same funding agency to deliver the same type of service.

“Grants are too short and too uncertain. Longer contracts and more certain funding is needed to deliver children and family services in the Northern Territory,” Chair Michael Brennan said.

The Productivity Commission says it has been mindful of the history of abrupt policy changes in this area and has instead sought to build on reform efforts already underway.

The final report was handed to government on 30 March 2020 and can be found at www.pc.gov.au.

We released our final report on 8 April 2020. The report looks at how the safety and wellbeing of children in the Northern Territory can be improved. The focus is on how the Commonwealth and Northern Territory Governments can work better together to fund services.

What we have found

To more than 500 service providers

Despite these significant resources, governments are making short term funding decisions in relative isolation without a good understanding of:

What does our report propose?

A new approach to funding children and family services in the Northern Territory.

Governments should establish a formal coordination process (formalised in a new intergovernmental agreement) in which they:

We are proposing a four step process 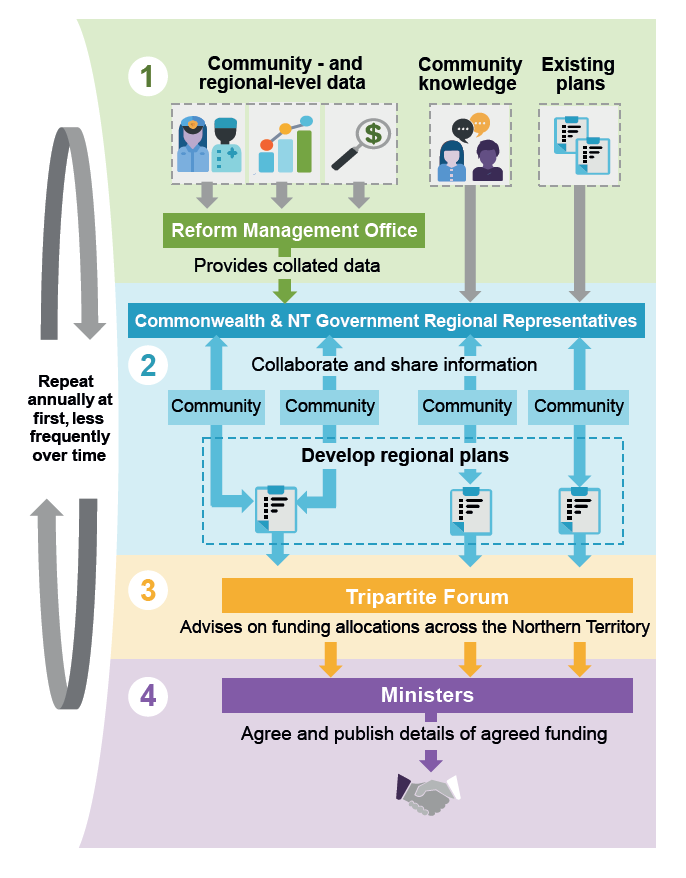 Better, more transparent data that is shared at the community level