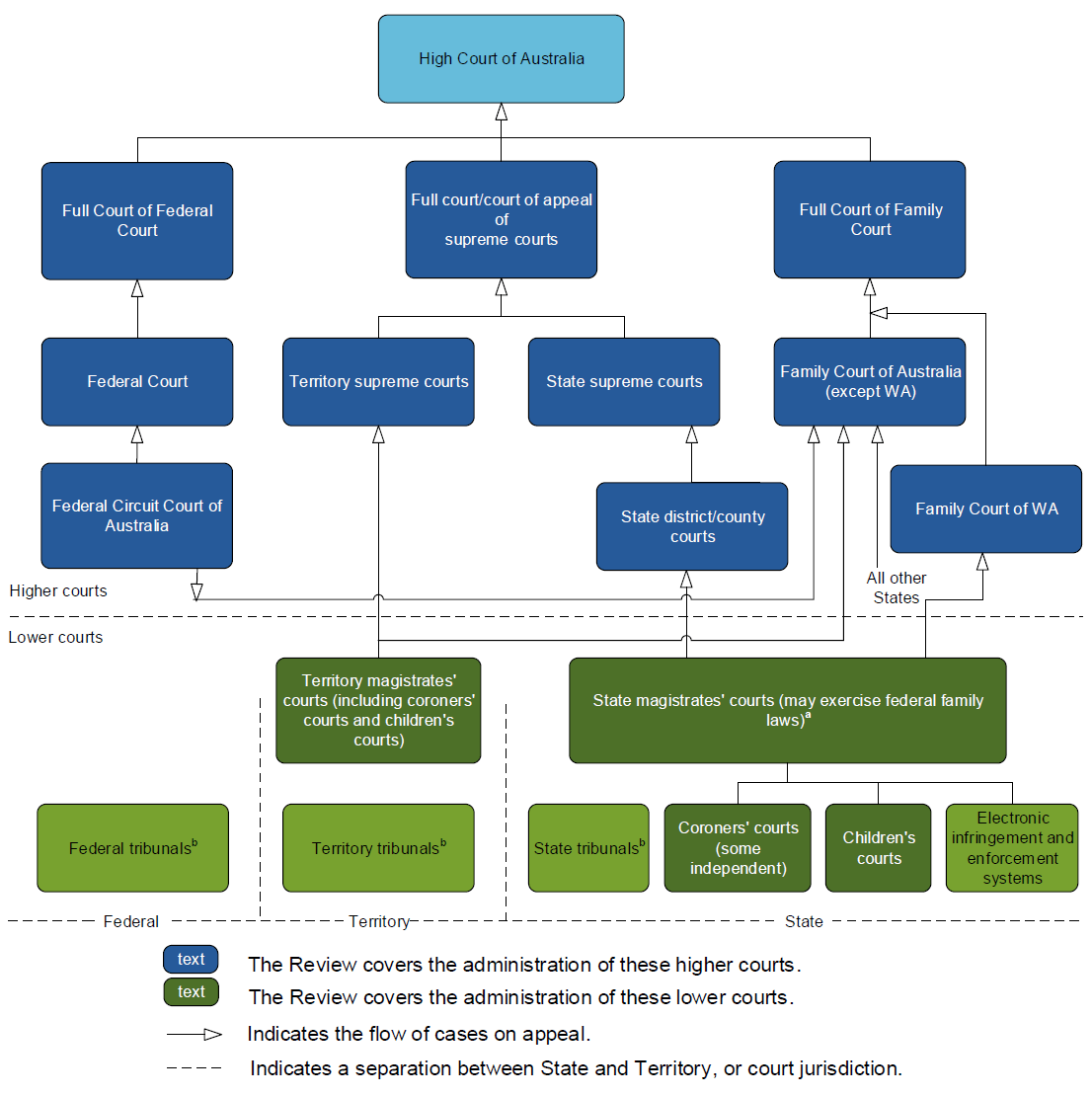 Total recurrent expenditure less court income, for the Australian, State and Territory courts in this Report was $1.6 billion in 2018-19 (tables 7A.14−15). Court income is derived from court fees, library revenue, court reporting revenue, sheriff and bailiff revenue, probate revenue, mediation revenue, rental income and any other sources of revenue (excluding fines). The civil jurisdiction of courts accounts for the vast majority of income received (table 7A.13).

Court fees are mainly collected in civil courts and in some jurisdictions are set by government rather than court administrators. The level of cost recovery from the collection of civil court fees varies across court levels and states and territories. Nationally, one quarter of costs in 2018-19 were recovered through court fees in the Supreme/Federal courts, 35 per cent in the District courts and 34 per cent in the Magistrates’ courts (table 7A.16). Cost recovery tends to be low in the children’s courts — in these courts many applications do not attract a fee.

Most courts in Australia are able to waive or reduce court fees to ameliorate the impact on vulnerable or financially disadvantaged parties (fee relief). Table 7.4 shows that the proportions of total payable civil court fees which were waived or reduced were highest in the Northern Territory Magistrates' court (53.7 per cent) followed by the Family Court of Western Australia (26.6 per cent), the Family Court of Australia (19.4 per cent) and the Federal Circuit Court (19.0 per cent).

Fee exemptions are also available in some courts — this is usually where legislation exists to exempt particular categories of fees from being payable. Fee exemptions are more common in the Australian Government courts than State and Territory courts (table 7A.19).

During 2018-19, approximately $33.2 million of civil court fees were either waived, reduced or exempted and therefore not recovered by courts (table 7A.19).

Size and scope of court activity

Nationally, there were 785 108 criminal lodgments registered in the supreme, district/county, magistrates’ and children’s courts in 2018-19 (table 7A.1) compared with 431 516 civil lodgments (table 7A.2). An additional 75 501 probate matters were lodged in the supreme courts (table 7A.2). Lodgments were higher in the criminal courts than civil courts across all states and territories (figure 7.2). In the coroners’ courts, there were 25 717 deaths and 95 fires reported, with numbers varying across jurisdictions as a result of different reporting requirements (table 7A.2). There were an additional 15 875 lodgments in the Family Court of WA.

Most criminal and civil matters in Australia in 2018-19 were lodged in magistrates’ courts (see figure 7.2). The number of lodgments per 100 000 people can assist in understanding the comparative workload of a court in relation to the population of the State or Territory (see tables 7A.3 (criminal) and 7A.4 (civil) for data by State and Territory).

Most cases that are finalised in the criminal and civil courts do not proceed to trial. Generally, cases that proceed to trial are more time-consuming and resource intensive. In the criminal courts, the proportions of all finalised non‑appeal cases that were finalised following the commencement of a trial in 2018-19 varied from 2 to 63 per cent in the Supreme courts and from 7 to 19 per cent in the District courts. Proportions in the Magistrates’ courts were generally lower still.

In 2018-19, across all Magistrates’ courts approximately 35 per cent of all finalised civil cases involved applications for domestic and family violence-related protection orders (excludes interim orders and applications for extension, revocation or variation) (table 7.6). 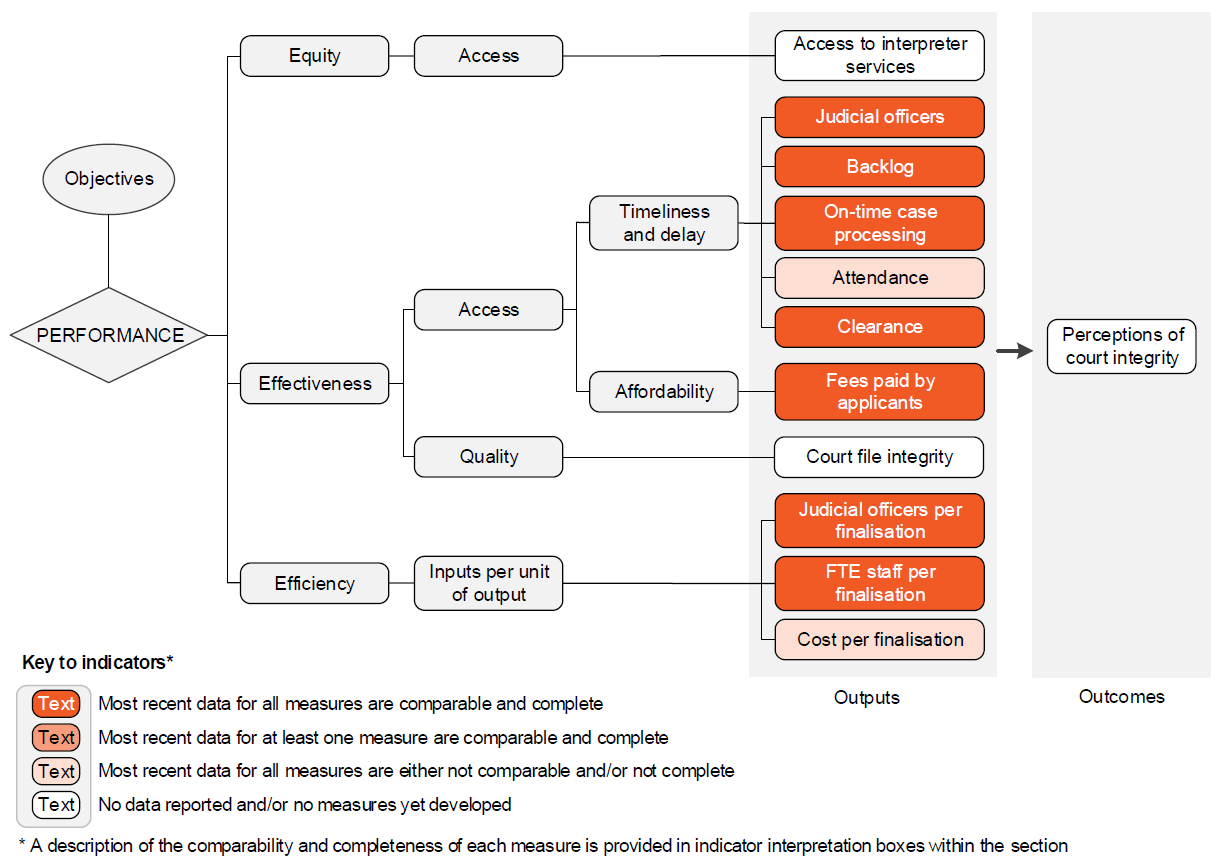 The courts data collection is based on national counting rules, so data presented in this section may differ from data published by individual jurisdictions in their annual reports. There also can be differences from the data reported in the ABS Criminal Courts publication (ABS 2019) — the ABS publication provides information about judicial decisions relating to finalised and adjudicated defendants.