Productivity: The Key to Prosperity

Productivity: The Key to Prosperity

Chair Michael Brennan spoke at the EY Pre-Summit Summit on Jobs and Skills on 17 August 2022.

Two weeks ago the PC released an interim paper on productivity growth as part of our 5-year Productivity Inquiry. The paper set out some aspects of Australia’s productivity challenge.

Productivity growth remains the only sustainable source of real wages growth — and the long term relationship between the growth in labour productivity and real wages is strong.

Productivity growth in Australia in the last decade has been the slowest of any decade for the last 60 years, consistent with a slowdown across developed economies. Our economy is increasingly dominated by services — now 80 per cent of value added and 90 per cent of employment. This might require that we think a bit differently about how future productivity growth will play out across the economy, what will drive it and what its main impacts could be.

As the chart shows, real wages track aggregate labour productivity growth over time. Different versions of this chart have sought to show a different result, with wages falling behind LP growth, using some different aggregates.

We believe this is the most robust approach — using the labour share of value add, divided by hours worked to derive an average wage index. The alternative uses the Wage Price Index, which is an excellent measure for assessing underlying wage inflation but not the ideal measure to assess returns to workers across the economy (because of the quality and compositional effects which it strips out, but which often are the recompense for productivity growth).

The larger point is that the main cause of low wages growth in Australia is low productivity growth, not the distribution of that growth between the capital and labour share.

The capital vs. labour share is an imperfect guide to the equality of income distribution — workers own capital through superannuation, and there can be increasing wage dispersion even with a higher overall wages share. In general, services are characterised by a larger labour input as a share of total value: services tend to be less capital intensive than goods sectors like agriculture and mining.

Unsurprisingly, as services have grown in importance, so have the skill needs of the economy. Since 2000, the (then) National Skills Commission found a large shift in the skill composition of the workforce in favour of people with a Bachelor degree (up from 26 per cent to 32 per cent of the workforce) and a decline in those with high school or certificate I (down from 20 per cent to 16 per cent). They estimate that 9 in 10 new jobs in the next 5 years will require post-school qualifications. That suggests that our university and VET sectors will take on increased importance. But there could be other subtle implications for skills formation across the economy. One is the even greater role of basic education at primary and secondary level. In a world where more jobs require post school qualifications, there are arguably bigger adverse consequences for those who do not get a solid grounding in basic skills like reading and maths early on.

Though evidence is mixed, scholars like James Heckman have identified diminishing returns to educational investment as children get older: the biggest returns accruing in early childhood and diminishing thereafter. While some of these findings have been over-interpreted; and other scholars have found reasonable returns on investments throughout school years, the broad point remains: a failure to obtain the basic building blocks early makes it harder to pick them up later.

Part of this is due to children developing a ‘technology of skill formation’ — learning to learn, not least in areas where mastery is built up cumulatively like maths. For those with strong foundational skills the effectiveness of later education and training is multiplied. Hence there is a strong incentive for those with strong fundamentals to keep learning, through formal lifelong training and on the job experience.

Australia is already a significant user of lifelong learning. Our review of the NASWD noted that around 60 per cent of Australian workers were engaged in unaccredited learning, with 15 per cent working toward a formal qualification. This could be one reason why the earnings premium accruing to university graduates (over those with high school only) keeps rising beyond age 50 — something in their early skill development has equipped them for ongoing learning, or human capital development. 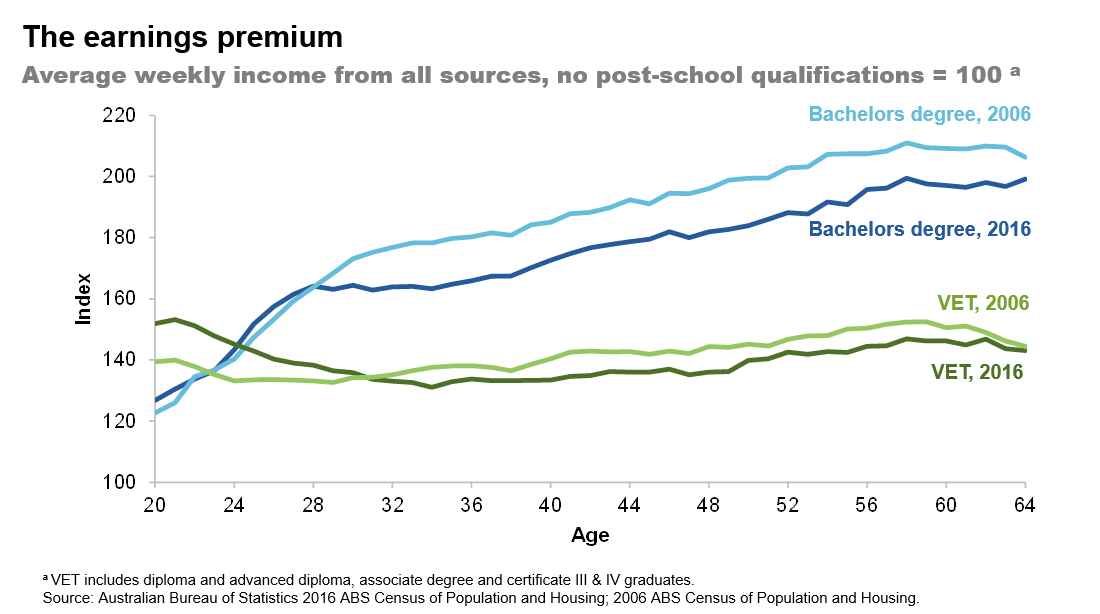 We cannot say with any certainty what the impact of higher skill levels on the overall earnings dispersion might be. The main point is that it could be problematic for those without basic skills.

The tax and transfer system (of which Australia has one of the most redistributive relative to its size) can help ameliorate earnings disparities. But the school system has a key role to play in the development of basic skills. Unfortunately too many children fall below minimum benchmarks for NAPLAN reading and maths levels, and there is a material gap in average attainment (measured in years of learning) between students whose parents have a Bachelor degree and those whose parents did not finish high school. And that achievement gap grows wider as students progress through school.

Another development is the growing importance of certain higher order skills in the modern economy, including social skills and judgment. A recent US survey indicated that 78 per cent of jobs involved ‘teamwork’ as a very or extremely important aspect of the rolei.

Other work has highlighted that the combination of strong maths skills with social skills is in increasing demand. This could reflect the growing importance of services. Service innovation perhaps involves a slightly different skill mix to pure scientific innovation. Both require creativity, patience and the right balance of self belief and self-reflection. But service innovation often involves a heavy dose of emotional intelligence, persuasion and motivation of others, synthesis of complex and uncertain real world situations.

These things are hard to teach, and it is unclear how and at what stage these skills are formed. We are a long way from having any sense of the most efficient way to cultivate these capabilities. But they are likely to be of increasing importance, alongside the core cognitive skills developed through the education system. A related question is whether entrepreneurship can be taught — something on which opinion is divided.

Even allowing a significant role for formal education, there is little doubt that lifelong and on the job learning will be very important. This implies a role for business, not just as a consumer of human capital, but as a co-producer. Particularly in a tight labour market, firms will be looking to access potential as much as proven talent. Much of the value creation will be in firms identifying people who can benefit from their specific workplace, their training and their teams, so as to grow into roles.

Graduates coming out of formal training are never the finished product — there has always been a big role for business to provide the formal and on the job training that further builds human capital. That goes for job-specific skills and some broader attributes which are general and transferrable, but nonetheless cultivated over time.

Obviously skilled migration will play a role in filling shortages and, in the longer term, raising Australia’s productivity. It is a valuable asset for Australia that we are attractive to skilled workers from overseas and can benefit from their different experiences and their accumulated expertise.

But, as I have noted elsewhere, the skilled migration tap is not infinite or costless. It is important that we ration places in the program sensibly and as transparently as possible. And we have to accept that it is not the solution to all skills and workforce shortages. In many cases, shortages will be addressed by broader policies to stimulate workforce participation, but also through changes in relative wages and the potential adoption of business models which are less labour intensive.

This is something we will be looking at in the 5-year Productivity Inquiry.

The Productivity Inquiry focuses on the enablers of productivity growth in a modern, market-based, service-oriented world. This first report provides the broad productivity context for the exploration of productivity-enhancing reforms detailed in a series of forthcoming interim reports.